Biofilms and their relevance for microplastics

Biofilms form in nature within a short time on almost all surfaces, including microplastics . Biofilms on microplastics collected in the environment have been detected in numerous studies. This also changes the properties of the microplastics, such as the surface texture and chemistry or the density. In addition, biochemical transformation processes can change the microplastic itself.

Biofilms in everyday life and in technical processes

The most well-known biofilm is the dental biofilm, which must be removed from the teeth daily by mechanical cleaning. In nature, biofilms occur at almost all interfaces. On walks in nature, for example, stones and rocks on the banks or in the water that are covered by a slimy layer of biofilm are often noticed. But biofilms can also have both negative and positive effects on technical processes.

Biofilms are used positively in the biological treatment of wastewater. In sand filters or on carrier materials such as discs or carrier chips, they can effectively clean water thanks to their large interface and remain locally bound. There are also initial attempts to grow biofilms that can produce chemicals through their metabolism that can be used in the chemical industry.

Biofilms can have a negative impact on technical processes if they lead to contamination or other negative effects. This is particularly problematic since biofilms are usually extremely resistant to mechanical influences and are therefore difficult to remove completely.

In the food industry or medicical/ pharmaceutical industry, biofilms can lead to considerable contamination and must be prevented at all costs. Another problem in medicine is the formation of biofilms in infected wounds or on implants, e.g. artificial heart valves. So-called biofouling is a very big problem in wastewater treatment, in which biofilms form on filter membranes, which clog them and can only be removed with great effort and aggressive cleaning agents. Biofilms also form in pipelines. When using metal pipes, e.g. for cooling water in industry, this can create biocorrosion. In households, biofilms with pathogens can lead to water contamination. The best-known example of this is legionella.

The formation of biofilms is divided into four phases. At the beginning, individual microorganisms attach themselves to the surface with their flagella, pili or biomolecules of their shell such as polysaccharides. In this phase, the interaction between the microorganisms and the respective surface, e.g. surface roughness and surface charge, is one of the most important factors. Microorganisms also settle much better on surfaces that are already covered with biomolecules.

In the second phase, the cells begin to bind irreversibly to the surface via excreted biomolecules, mainly polysaccharides and proteins and start to spread. This is the beginning of the formation of a film and the EPS. The microorganisms communicate with each other via so-called quorum sensing, a biochemical form of communication via messenger molecules. This enables organized growth and the diversification of tasks within the biofilm.

In the third phase, the microorganisms reproduce, and the growth of the biofilm begins, embedded in the EPS. The EPS forms a gel-like layer here, similar to Galantine, which offers the bacteria a habitat and protects them from external influences and drying out. The disadvantage of the EPS is the slower transport of substances within it, which can lead to a reduced availability of nutrients and oxygen. Therefore, with the help of quorum sensing, the biofilm organizes itself in such a way that its structure enables the best possible adhesion with a good availability of nutrients, through the formation of channels through which water can flow or by forming a rough, irregular surface. The tasks of the microorganisms can also diversify within the biofilm, depending on their location and availability of nutrients, oxygen or excreted metabolic products, which are processed symbiotically among the species.

In the fourth phase, there is a mature biofilm, which can reach a size in which the nutrients are no longer available in the entire colony. Therefore, the microorganisms begin to partially degrade the EPS, releasing them, allowing them to disperse in the water and potentially form new colonies.

Why bacteria form biofilms is not yet fully understood. There are four main theories. The first theory states that biofilms provide a better protection against stress and external influences, so there are evolutionary advantages to forming them. Another reason could be that the formation of communities of different microorganisms with different properties and possible symbioses within the biofilm provides a survival advantage. Many ecological niches and habitats can also be settled better by biofilms. The last theory assumes that the biofilm is the original way of life of the bacteria, into which they return, since the planktonic way of life formed later in the course of evolution. 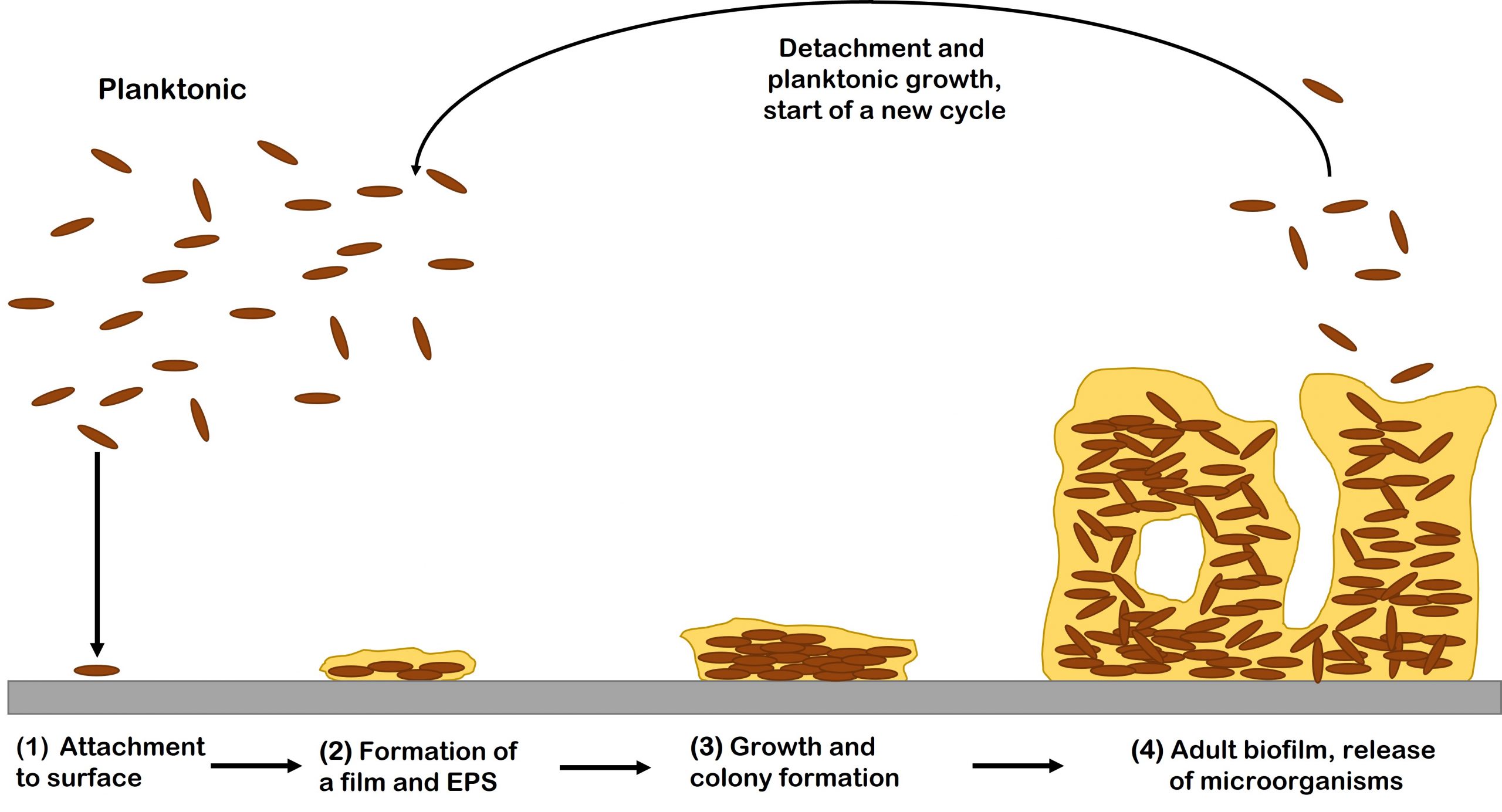 Hollmann B., Perkins M., Walsh D., Biofilms and their role in pathogenesis, British Society for Immunology (2015).

In addition to the particle size, one of the most important factors for the processing and fate of microplastics after ingestion into an organism is the surface chemistry. Studies have already shown that biofilm-covered microplastics, which are covered with natural molecules, are absorbed into the tissue much better, since they are more similar to natural substances and are therefore better accepted by the organism.

The removal of microplastics using surface-active methods such as flocculation or density-dependent methods such as sedimentation or flotation are also influenced by the change in density and surface properties. In microplastic research, in which the countless types of plastic with a wide variety of properties under which microplastics are summarized, already represent a huge challenge, the change in properties due to biofilm growth is still given little consideration.

We have developed a method to be able to grow biofilms on reference microplastics in a simple and uncomplicated manner within a short time (approx. one week) in order to use them in further test series and to simulate microplastics in nature. Here, microplastic is filled into a column and biologically treated municipal wastewater flows through it. The wastewater has a high number and diversity of bacteria that can potentially settle on the microplastics and at the same time provides many nutrients. The addition of glucose further increases nutrient availability. The flow through the microplastic leads to a continuous exchange of water and thus a high availability of nutrients, which greatly accelerates the formation of biofilms.

How can biofilm be made visible on microplastics?

CLSM (Confocal Laser Scanning Microscope) and SEM (Scanning Electron Microscope) deliver images of biofilm-covered microplastics from this method. The CLSM images impressively show how the microplastic is covered by the EPS (green in the figure), in some areas more than others. The red areas heavily colonized with bacteria are also noticeable. The SEM images clearly show how the bacteria adhere to the surface and form colonies and EPS there. 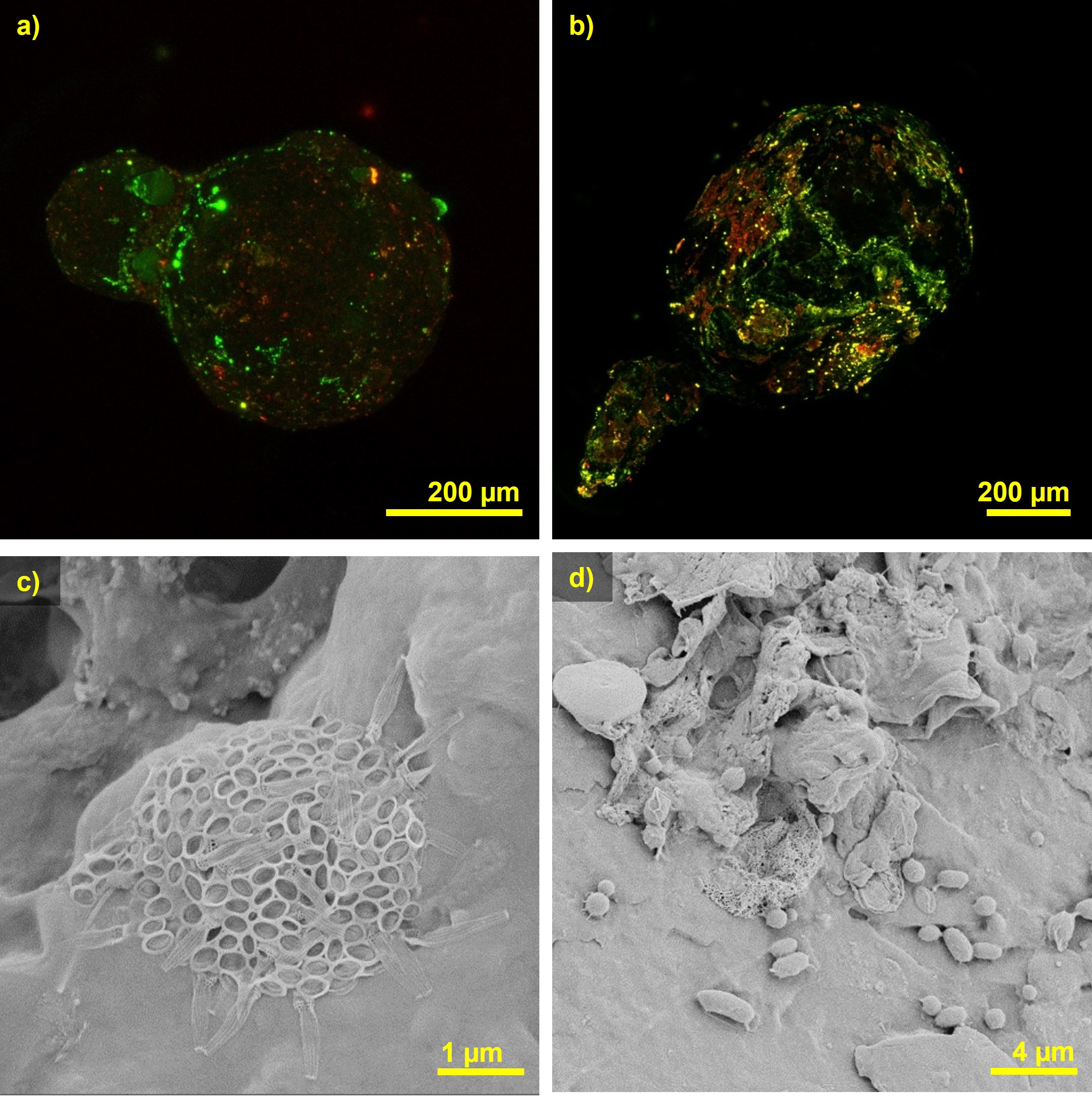 above: CLSM (confocal laser scanning microscope) images of biofilm-covered microplastics (polyethylene on the right, polypropylene on the left) after a week's incubation in a fixed-bed column through which biologically treated wastewater flows. The green areas are heavily covered with EPS, the red areas are heavily colonized with bacteria.

below: SEM (scanning electron microscope) images of biofilm-covered microplastics (polyamide above, polyvinyl chloride below) after a week's incubation in a fixed-bed column through which biologically treated wastewater flows.