Microplastics were first detected in large numbers in the world's oceans in 2004. That made one thing very clear: plastic in the environment doesn't just go away. And not “only” with plastics, with microplastics too, we are dealing with an environmental problem of enormous and global proportions. (Thompson et al., 2004 ) In 2010 alone, the amount of plastic waste entering the oceans was estimated at almost 13 million tons. (Jambeck et al., 2015 ) Microplastics is a young research area with many unknowns. Science, industry and politics face enormous challenges in order to grasp the phenomenon in all its complexity and to find effective solutions against its further spread. If we want to understand what is hidden behind the term and research field of microplastics, we have to direct our attention to how we deal with plastics: from production to use to disposal or reuse. Here we have put together a few facts about the current state of affairs. There are different definitions of microplastics and differentiations from, for example, nanoplastics. In the meantime, however, there is broad consensus that plastic fragments smaller than 5 mm should be called microplastics. 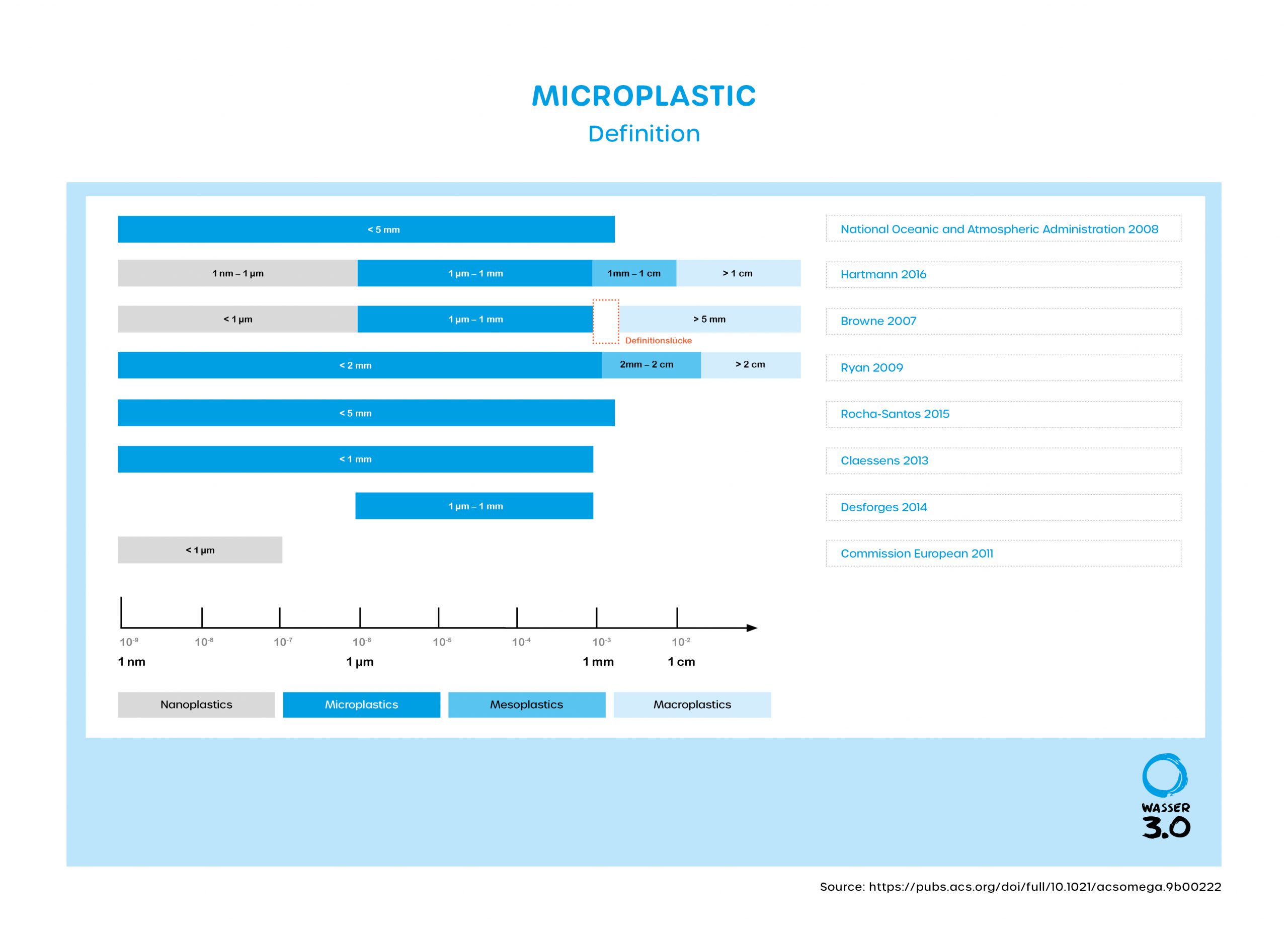 Microplastics enter our environment either directly or indirectly.


We speak of indirect entry paths when plastic objects disintegrate into smaller and smaller components due to UV radiation, oxidation and / or mechanical effects. This is how millions of microplastic particles are ultimately created in our ecosystems (Law et al., 2014 ). Depending on their individual composition, they distribute quickly or slowly in the water, soil and air.

Microplastics can also get into the environment directly: through tire abrasion, artificially produced textile fibers that are released when washing clothes, care products such as peelings that contain microplastic particles. Industrial wastewater is also one of the major sources of input. (Boucher et al., 2017 ) 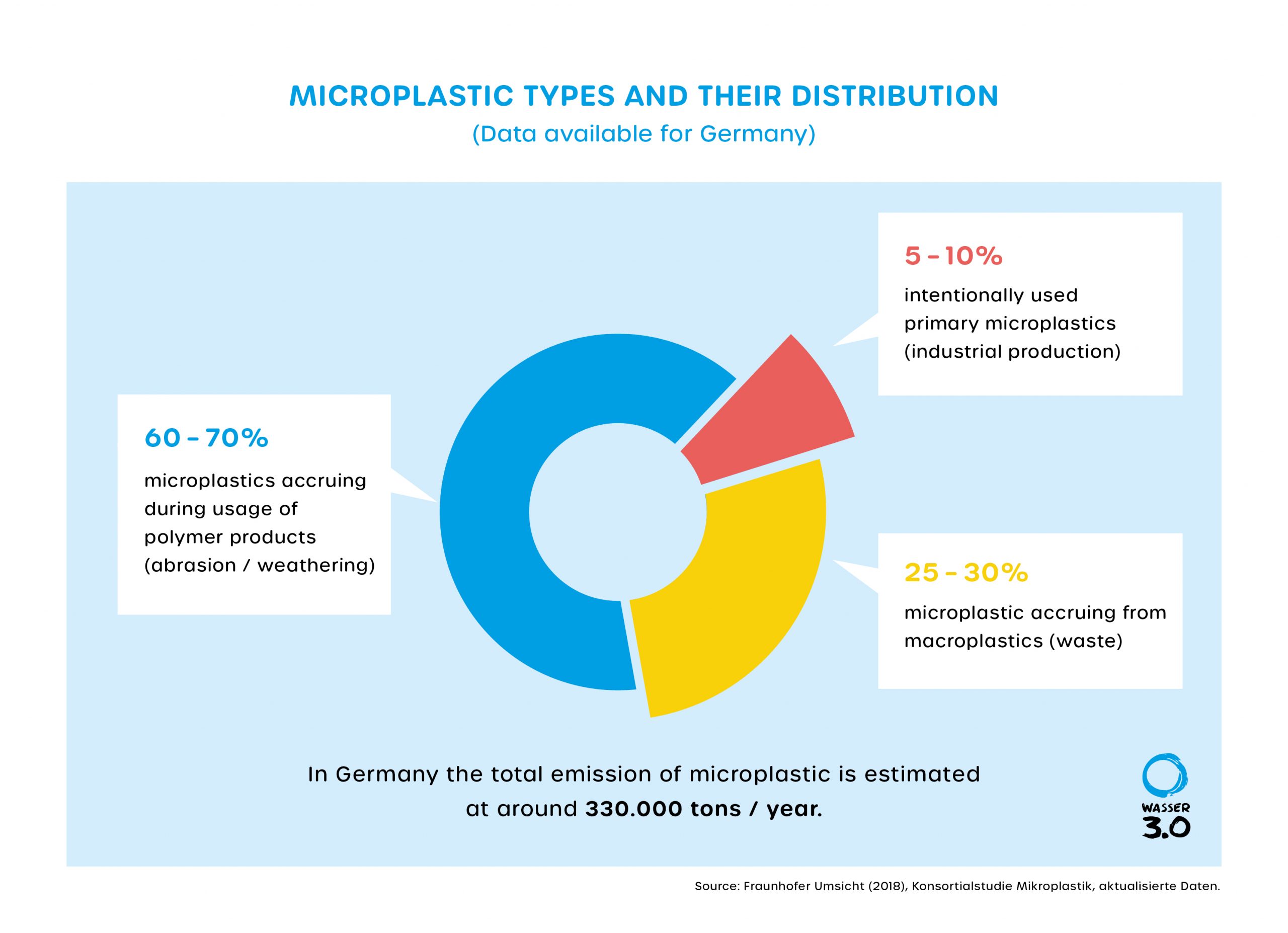 The proximity to heavily populated areas and poor waste management lead to particularly high levels of contamination. Point sources such as sewage treatment plants or the plastics industry are also important influencing factors. Furthermore, contamination is influenced by transport processes such as wind, water currents, ebb and flow and surface runoff from rain.

In general, limnic ecosystems are more heavily contaminated than marine ecosystems, since microplastics can be distributed more widely in the enormous volume of marine ecosystems. In marine systems, particularly high levels of contamination occur in heavily populated areas with poor waste management, for example on the East Asian coast. Microplastic collects in so-called "garbage patches" as a result of converging ocean currents in the oceans. Microplastic contamination of up to 12,000 particles / m³ was found in the Arctic sea ice. It thus serves as a temporary sink in the microplastic cycle, since the microplastic is released again when the ice melts. (Lusher et al., 2015) 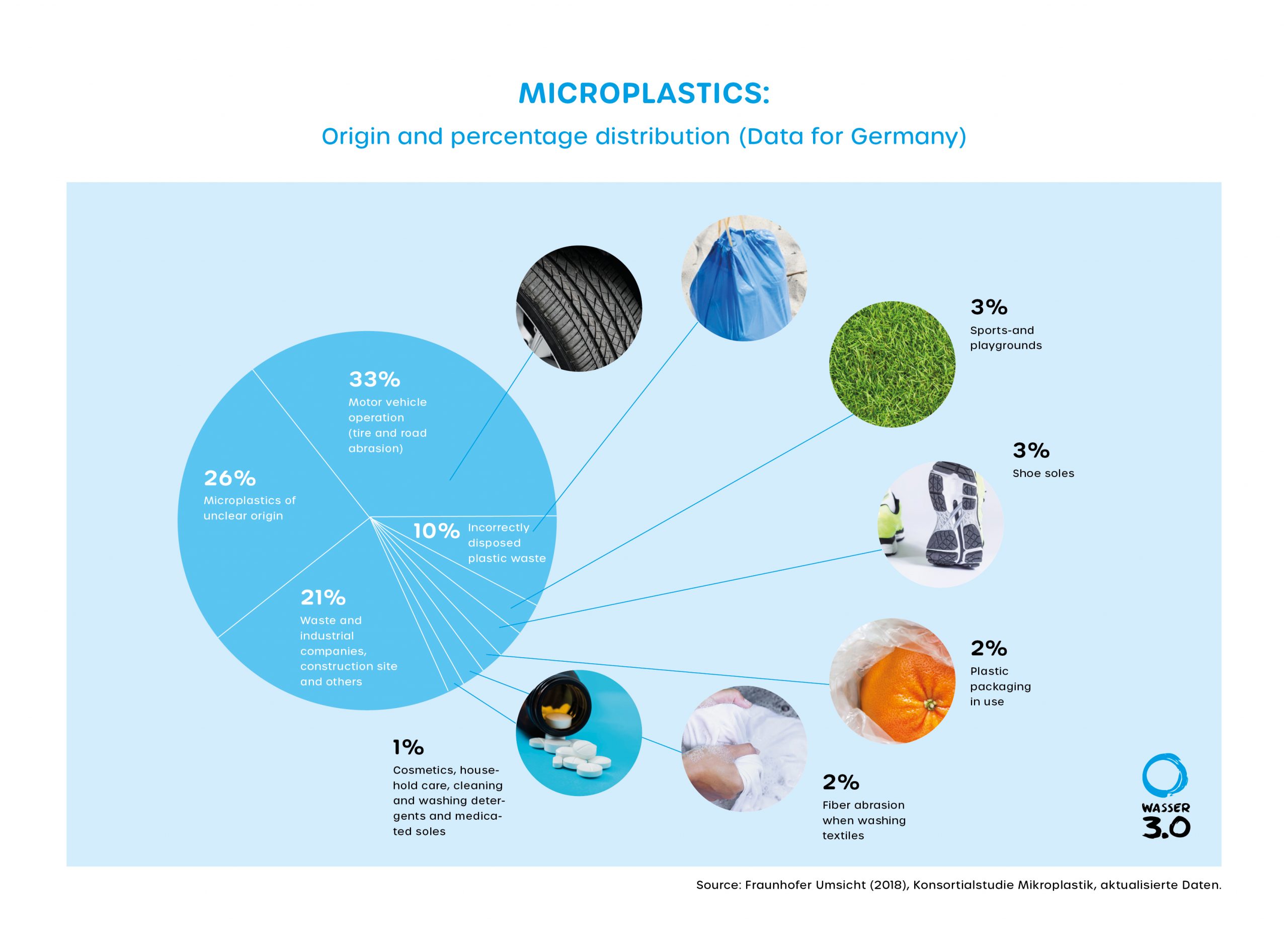 There is intense discussion and research about how dangerous microplastics are for humans, animals and the environment. Mainly due to their small size (≤ 5 mm), microplastics pose a threat to animals and the environment, as they are accessible to a large number of organisms and are kept and eaten for food, for example. In addition, each microplastic particle has an individual composition due to previous production, use and disintegration processes. Extremely harmful micropollutants such as residues of plasticizers, heavy metals, PFOS or pharmaceuticals can adhere to microplastics. This increases the risk of physical and toxicological damage to organisms and ecosystems (Law et al., 2014 ). 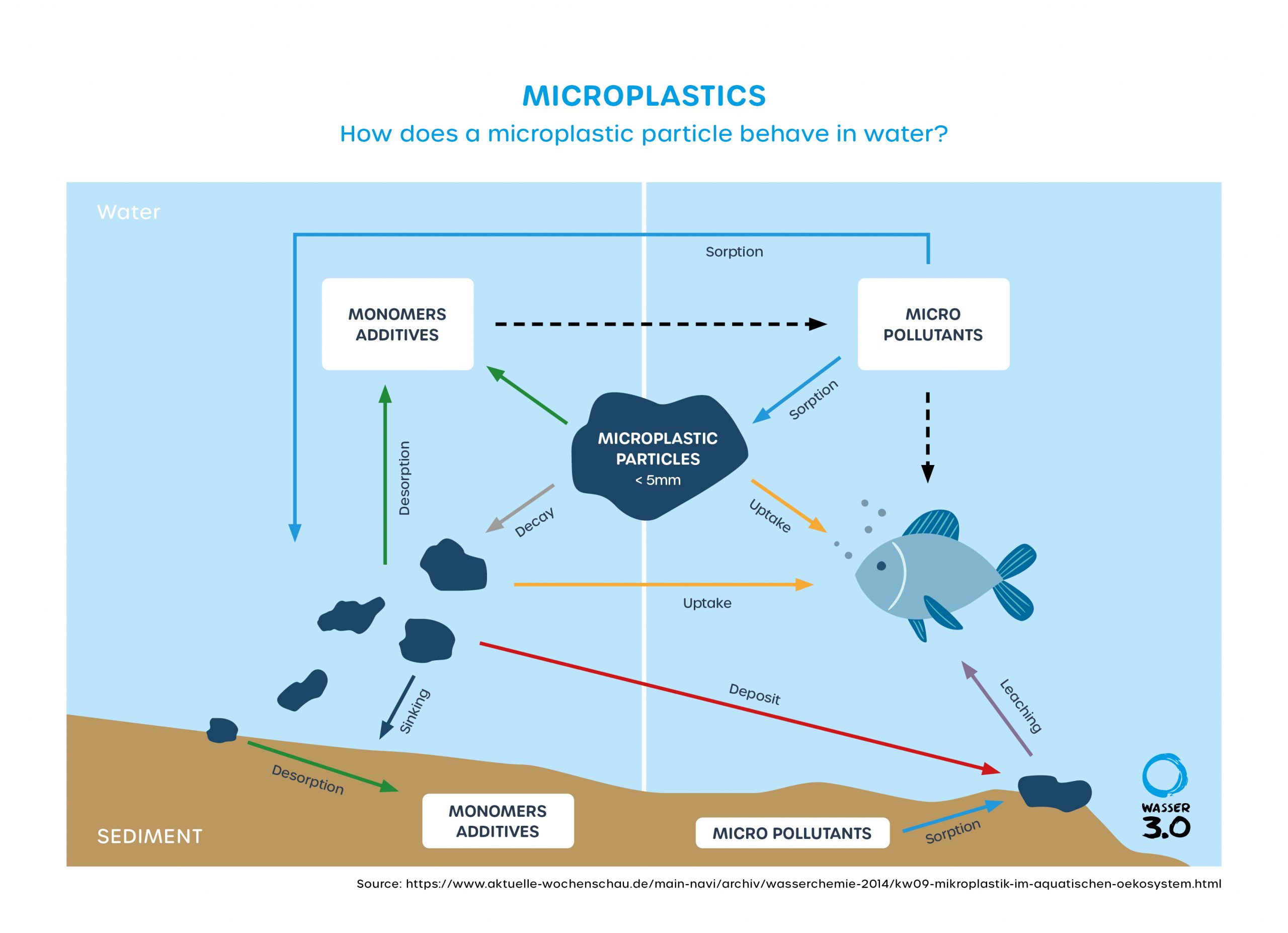 Microplastics are also transported or accumulated within the food chain. It also gets into the human body (FAO, 2016). What kind of consequences for human health and how harmful this will ultimately be cannot be foreseen at the moment. 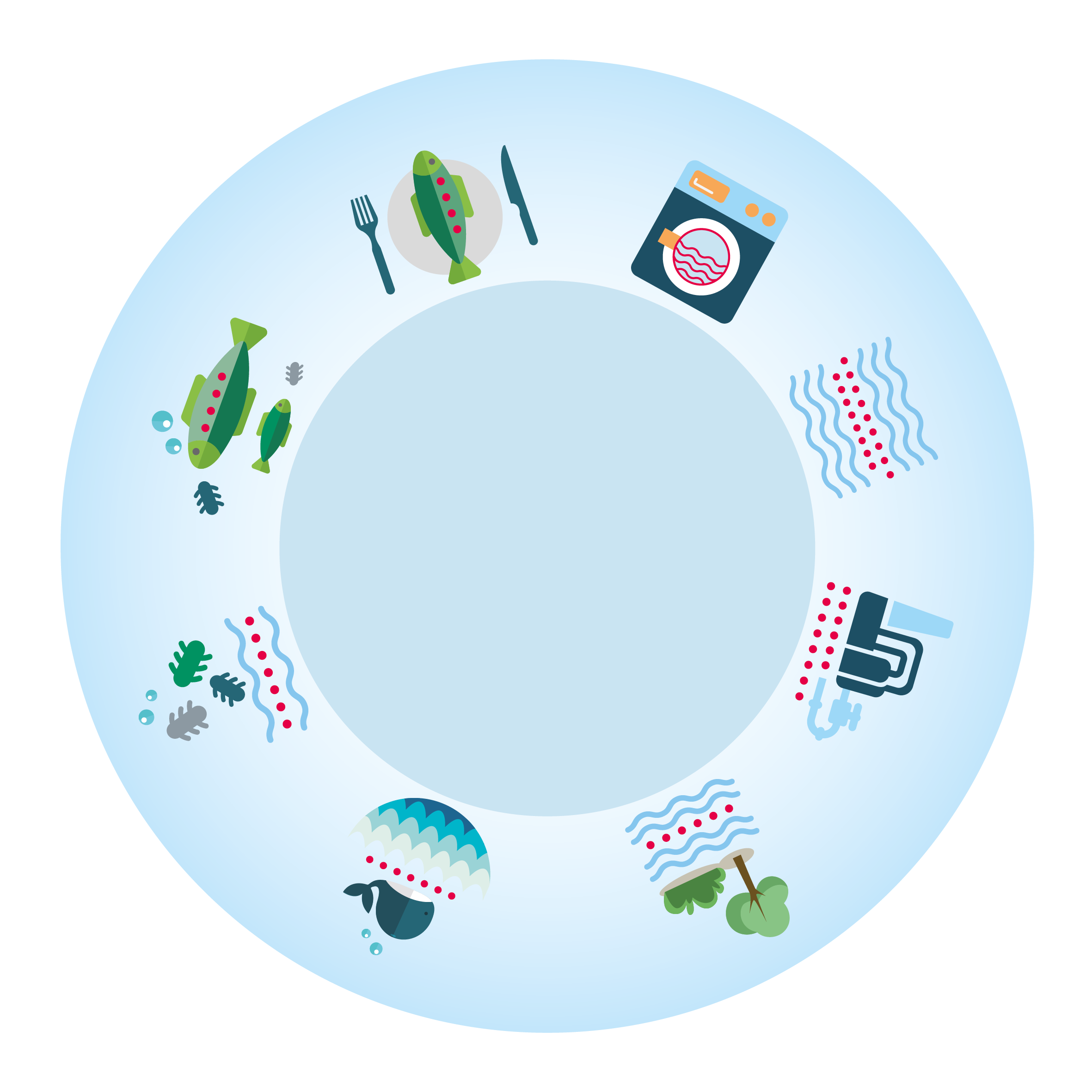 Methods for the detection of microplastics are also discussed and researched. So far there has been no simple, standardized and fast analytical method that can also be used outside of laboratories in real water and that can detect microplastics in different environmental matrices as reliably and reproducibly as possible. Due to the use of very different procedures, the data collected so far are difficult to compare and are often not very meaningful. This is one of the main reasons why there are still no limit values ​​or political guidelines for dealing with microplastics.

An efficient identification and quantification of microplastic pollution is a great scientific challenge, because as the size of the particles (nanoplastics) decreases, it becomes more and more difficult to recognize and detect them. Micro- and nanoplastics that have not been proven can therefore easily lead to the fallacy that they do not exist, because especially in the environment: Just because you can no longer see or detect something does not mean that it is no longer there.

Read more how we approach the topic and our other questions about removal and recycling.
Microplastics detection Microplastic removal Publication More infographics